CHATTANOOGA, Tenn., Feb. 20, 2020 /PRNewswire/ -- Cindy and Phil Bacon, franchisees at FASTSIGNS® of Chattanooga received national recognition as the recipients of The FASTSIGNS® Award at the 2020 FASTSIGNS International Convention held in Phoenix, Arizona. 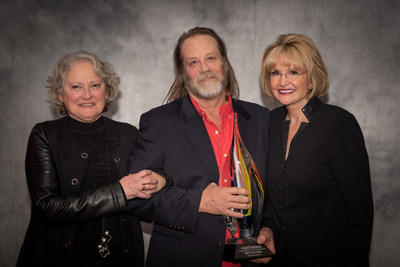 This award is the most prestigious recognition in the franchise network of over 725 locations in nine countries worldwide. It is presented to the franchisees who best represent the FASTSIGNS brand in their community and in the network, as they provide exceptional customer service, mentorship, company culture and employee development.

"We are honored to be named the recipients of the FASTSIGNS Award, because we know the high level of franchisees who have won this," said Phil Bacon. "We are so thankful to be a part of such a supportive network like FASTSIGNS and see the growth that comes from investing in an incredible brand like FASTSIGNS."

Hailing from their home tucked in the hills of Tennessee, Phil Bacon, a native Tennessean, along with his wife, Cindy, opened their Chattanooga-based FASTSIGNS center in mid-July 1990. The Bacons have replicated the FASTSIGNS model and have risen through the network ranks, establishing a name for themselves among their peers. Notably, this was not their first opportunity to rise to the top of a franchise network.

Prior to FASTSIGNS, Phil and CIndy joined a family business with Phil's entrepreneurial parents, helping them manage two diet franchise locations. Phil and Cindy managed and grew the two locations to number one and two in the nation during the years of 1987, 1988 and 1989 as they supported customers in achieving their weight loss goals.

"Phil's parents taught us so much about business," said Cindy Bacon, franchisee at FASTSIGNS of Chattanooga. "Much of how we manage our own business today came from watching and listening to them, because they were awesome business franchise owners."

Today, the Bacons have grown their highly successful FASTSIGNS center and now have over 25 loyal team members. They attend every FASTSIGNS event, often bringing their team members with them. The Bacons have created a culture of mutual respect at FASTSIGNS of Chattanooga. With many tenured team members, the Bacons show that they value each and every person on both a professional and personal level. Their authenticity and genuine concern for their team has been witnessed many times over. For example, when one team member could not afford needed medical treatment, they paid for it on their own.

Even at their high level of performance, the two remain actively engaged in their business and with the corporate team, placing strong value on the support they receive, reaching out on a daily basis for questions, advice and insight.

These savvy entrepreneurs go a step beyond by giving back into the network they have joined. They continually support other FASTSIGNS franchisees, providing countless hours of mentorship, and helping visiting franchisees feel instantly welcome as they take the time to answer each and every question that might arise.

In addition to the highest recognition, FASTSIGNS of Chattanooga received a Sales Achievement Award for Highest Volume Center, ranking No. 1 in the FASTSIGNS network out of more than 700 locations worldwide. They also received a CEO Circle Award, which recognizes the top 25 centers with the highest sales volume in the U.S. and Canada between Oct. 1, 2018 and Sept. 30, 2019.

"The Bacons are 100 percent committed to FASTSIGNS and excel in solving visual communication challenges daily," said Catherine Monson, CEO at FASTSIGNS International, Inc. "They are incredibly driven business owners. Because of that, they deserve the ultimate in recognition. They represent the brand with passion, excellence and enthusiasm, totally committed to helping other franchisees do the same."

FASTSIGNS International, Inc. celebrates its 35th anniversary in business in 2020 as the leading sign and visual communications franchisor in North America, and is the worldwide franchisor of more than 725 independently owned and operated FASTSIGNS® centers in 9 countries including the United States and Puerto Rico, the United Kingdom, Canada, Chile, Grand Cayman, the United Arab Emirates, Malta, France and Australia (where centers operate as SIGNWAVE®).

FASTSIGNS locations provide comprehensive signage and visual graphic solutions to help companies of all sizes and across all industries attract more attention, communicate their message, promote their products, help visitors find their way and extend their branding across all of their customer touch points. FASTSIGNS has been ranked the #1 franchise opportunity in its category in Entrepreneur magazine's Franchise 500 for the past four years, a 2019 Top Franchises for Veterans by Franchise Business Reviewand a 2019 America's Best Franchises to Buy list by Forbes magazine.

Learn more about sign and visual graphic solutions or find a location atfastsigns.com. Follow the brand on LinkedIn at linkedin.com/company/fastsigns, Twitter@FASTSIGNS or Facebook atfacebook.com/FASTSIGNS. For information about the FASTSIGNS franchise opportunity, contact Mark Jameson (mark.jameson@fastsigns.com or call 214.346.5679).

Looking for a new vendor?
Choose any category below to get started and compare price quotes for free.
Large Format Printers